Anatomy and Physiology of the Human Skeleton and Muscles

Bone is an organ that is constantly remodelling, growing and repairing itself. Bone contributes to the homeostasis of the body providing support, protection, production of blood cells and the storage of nutrients, minerals, lipids and triglycerides. Bone is comprised of a mineral called calcium and consists of a number of tissues: bone or osseous tissue, nervous tissue, adipose tissue, epithelium, cartilage and dense connective tissues. Typical bone structure is the diaphysis (shaft), epiphysis (end), articular cartilage (connective tissue), periosteum (fibrous membrane) and marrow cavity (where bone marrow is stored). 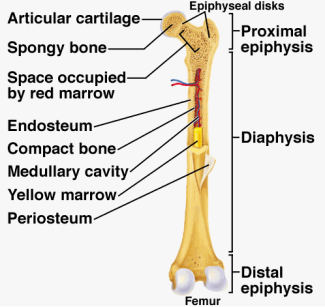 There are two major types of bone. Trabecular bone gives supporting strength to the ends of weight-bearing bones and contains many tiny spaces that are filled with marrow. Cortical bone on the outside forms the shaft of the long bone. Each bone contains two types of osseous tissue. Compact bone is dense and solid and is always found on the surface of the bone. Spongy bone has porous structure, and is found in the interior of bones.

The function of bone is to:

The skeleton is the structural framework of bones which gives shape and support to the body. Different bones are connected by joints to allow function and movement. The skeleton is comprised of two parts; the axial and appendicular skeleton. Bone is the major organ of the skeletal system and has a number of functions:

Complete a table similar to the one below.

NB: I have not included a fused joint such as the suture in this table as the criteria asks for freely movable joints and this joint has no free movement.

Movements that take place during running are due to the contraction of skeletal muscles pulling on bones which move at flexible pivot points, or joints. These contractions are:

When working at a computer deep stability/core muscles are used more than the abdominals. The head and neck facilitate stability and the senses and the respiratory muscles are vital. Joints around the shoulder and thoracic spine are crucial for allowing fine motor skills into the periphery.

Spine/abdomen – When sitting the external obliques, erector spinae, rectus abdominis, transverse abdominis and internal obliques are used. The erector spinae muscles work to maintain the correct “hollow” in the lumbar spine. The iliopsoas muscles pull the torso forward to stop it falling backward.

Shoulder – The muscles of the shoulder bridge transitions from the torso into the head/neck area and the upper extremities of the arms and hands.

Hip – The anterior hip muscles are shortened and the hamstring muscles are inactive. This stops the hips from flexing during forward bending and forces the lower back to bend beyond its strong middle range.

Knee – The popliteus muscle at the back of the leg unlocks the knee by rotating the femur on the tibia, allowing flexion of the knee (less so if feet are supported).

Elbow – The elbow permits movement along one plane, namely the flexion and extension of the forearm relative to the upper arm. The muscles provide both strength and flexibility to the arm.

Hand/wrist – More than 30 individual muscles in the hand and forearm work together to provide the hands with unsurpassed flexibility, precise control, and gripping strength. The muscles can be broken down into three main regions: the thenar, hypothenar and intermediate muscles.

Skeletal muscles have complicated structures that allow them to move, what are these structures and how do they allow muscles to carry out their roles?

Skeletal muscle is attached directly or indirectly through tendons to bones, cartilages, ligaments or fascia. Skeletal muscles are striated and cylindrical fibres run in parallel the length of the muscle and contain many nuclei. Skeletal muscle is controlled by the nervous system and is voluntary because it can be made to contract or relax by conscious control. Generally an artery and one or two of the major veins accompany each nerve, penetrating each skeletal muscle and branching through connective tissue within the muscle.

Movement – This is the muscles reaction to a nervous electrical impulse. The muscle can respond to a stimulus and is able to shorten powerfully. An electrical impulse, or action potential, is carried by a nerve cell to a muscle cell. When the action potential reaches the end of the nerve cell, it is translated into a chemical signal and travels to a specified muscle cell. The muscle cell contracts, or shortens, in response to the signal it receives from the nerve cell. Skeletal muscle returns to its original shape after contracting or lengthening.

Stabilisation – Joints are made when bones meet. The ends that meet are covered in a smooth cartilage that reduces friction upon movement of the joint. Ligaments connect the joint together to attach bone to bone. Tendons connect bone to muscle and the tendons are held tight by the muscles. The muscles maintain a small amount of contraction, even when resting and this is necessary for holding joints together. Skeletal muscle is also important for maintaining posture. Our muscles make small adjustments all the time to keep us sitting or standing up straight.

Temperature – Skeletal muscle makes up about 40% of the body’s muscle mass. Skeletal muscle generates heat as a by-product of muscle activity and this heat is vital for maintaining your normal body temperature.

‘Movement requires muscles and all muscles have antagonistic pairs’. Using this as the title write a short account of how muscle contraction and antagonism is vital for the co-ordinated movement of an organism.

Muscles are made up of two major protein filaments: a thick filament composed of the protein myosin and a thin filament composed of the protein actin. Muscle contraction occurs when these filaments slide over one another in a series of repetitive events. The body needs energy for the contraction of muscles. This energy is obtained from the oxidation of food substances such as glucose in the mitochondria of the muscle tissue.

Usually muscles work in pairs, the agonist contracting and the antagonist working in opposition. This is called reciprocal inhibition. However the eccentric action of controlled lengthening can occur when using gravity and antagonistic co-contraction is not required. For example in the case of a drawbridge, the agonist is the lifting of the bridge, as the muscle contracts (shortens) concentrically the bridge pulls up. Eccentric action is the relaxing of the agonist and controlled lengthening, in this example the lowering of the drawbridge. This can be control either working against (using the antagonist muscle) or in this example lowering to gravity.

Muscles that Cause Movement at the Knee Joint. 2015. [ONLINE] Available at: https://www.boundless.com/physiology/textbooks/boundless-anatomy-and-physiology-textbook/the-muscular-system-10/muscles-of-the-lower-limb-107/muscles-that-cause-movement-at-the-knee-joint-579-9335/. [Accessed 31 January 2015].